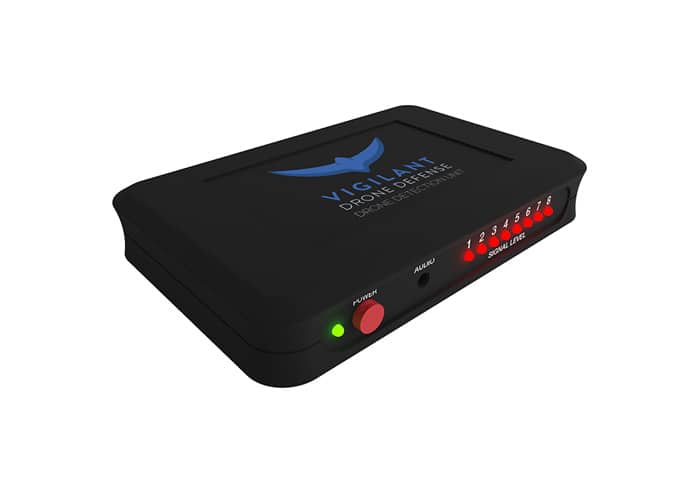 The DDU-1 can detect the transmission signals emitted by commercially available drones from a distance of approximately 2 Km. When the DDU-1 detects drones in nearby airspace, the units LED display activates with Red lights. The number of LED's illuminated indicates the signal strength, which equates to the distance of the detected drone. A pulsing audible warning is also activated, which can be monitored via the 3.5 mm audio jack port. The faster the pulse, the stronger the detected signal, the closer the drone is to the DDU-1 unit. At close range, this means all 8 LED's will be activated, and the audio tone will be constant.

Our next version of the DDU-1 can be used to monitor surrounding airspace for drone activity. Upcoming upgrades will allow the DDU-1 to activate Vigilant Drone Defense products. DDU-1 units can be deployed within or near sensitive areas, then linked either by cable or wireless links back to a central control station. This will allow our next version to automatically activate our Vigilant Drone Defense system for a pre-determined time. The contact closure on the unused 3.5 mm port can also be used to trigger sirens or any other warning devices.

The size and weight of the unit allows it to be carried by government personnel to alert them of the near proximity of a drone. This can be for major events such as large public gatherings, concerts, or sporting events, or for other sensitive law enforcement activities.

The DDU-1 is completely self contained, and is ideal for use in light fixed and rotary wing aircraft. The unit's internal directional antenna scans an area which is 160° horizontal and 160°vertical. The most likely time for an aircraft to be in danger of a drone collision is during it's landing approach to an airport.

If used on a light aircraft with a landing speed of about 60 knots (31m/s) the unit will provide warning of a possible collision with a drone of approximately 90 seconds.

If used on commercial passenger aircrafts with a landing speed of about 150 knots (77m/s) the collision detection warning is reduced to approximately 40 seconds.

Ready to make your best choice?